With the Digital India initiative, India has witnessed a more human-centric approach to development, said Prime Minister Narendra Modi while addressing the Bengaluru Tech Summit on November 19. PM Modi inaugurated the Summit online through a video conference. Union Minister for Electronics & IT, Communications and Law & Justice, Ravi Shankar Prasad, along with Karnataka Chief Minister, BS Yeddiyurappa was also present at the occasion. 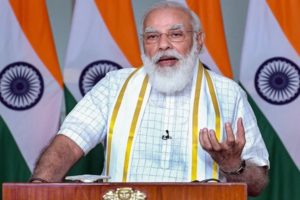 The PM said, using technology on such a large scale has brought about several changes for the citizens and the benefits are clearly visible. The government has not only created a market for digital and technological solutions but also made it a key part of all schemes. His governance model is ‘technology first’ and through technology, human dignity has been enhanced like crores of farmers receiving monetary support in one click and successfully operating the world’s largest healthcare scheme, Ayushman Bharat, the PM added.

Further, he emphasised that technology ensured India’s poor received proper & quick assistance even at the peak of the lockdown.

The Prime Minister said the Government has used the power of data analytics to ensure better service delivery and efficiency. He remarked technology is the prime reason our schemes have transcended files and changed the lives of the people at such a speed and scale. He said due to technology we are able to provide electricity to all, cross toll booths faster, gives us the confidence to vaccinate a large population in a short period of time.

The Prime Minister said India is uniquely positioned to leap ahead in the IT era. He said India has the best minds as well as the biggest market. He pointed out that our local tech solutions have the potential to go global. It is time for tech-solutions that are designed in India to be deployed for the world, he highlighted.

Also Read: UP Govt aims to establish IT parks in all divisions in collaboration with STPI

On strengthening the tech ecosystem in the country, the PM added that the Government always tries to engage with stakeholders in the tech industry and chart out future-proof policy frameworks for India.

The summit themed “Next is Now” was organised by the Government of Karnataka along with Karnataka Innovation and Technology Society (KITS), Karnataka government’s Vision Group on Information Technology, Biotechnology & StartUp, Software Technology Parks of India (STPI) and MM Activ Sci-Tech Communications.