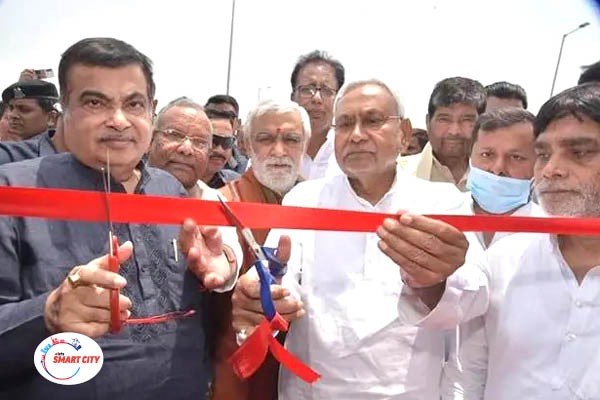 Union Minister for Road Transport and Highways Nitin Gadkari inaugurated and laid foundation stones of 15 National Highway projects in Patna and Hajipur in Bihar with a total cost of Rs13,585 crore.

Speaking on the occasion the minister said that Mahatma Gandhi Setu is the lifeline of Bihar, which connects North Bihar with South Bihar. With this superstructure replacement project, the time taken to cross Mahatma Gandhi Setu has been reduced from two to three hours to five to 10 minutes. He said, the Chhapra-Gopalganj section being two-lane with four bypasses will allow the traffic of the highway to pass through the bypass and the city will not face traffic jams.

The minister said that the route from Umagaon will directly connect the religious places of Uchhaith Bhagbati and Mahishi Tarapith. Aurangabad – Chordaha section six-lane road will improve the connectivity of Bihar with Uttar Pradesh, Jharkhand, and West Bengal.

He said that Munger – Bhagalpur – Mirzachowki section four-lane greenfield road will facilitate the farmers of this region to deliver their crop across the country, which will increase the income of the farmers. He said the two-lane road being built on NH-80 will facilitate connectivity between Bihar, Sahibganj, and Assam connecting with the Inland Waterways Terminal reducing the logistics cost.

Apart from this, the Minister said that traffic will be facilitated from Begusarai elevated flyover, Jayanagar bypass ROB and long jams of level crossings will be avoided. With the construction of Ara four-lane road from Kayamnagar, the traffic for Ara will be smooth, he added.