The Draft ‘National Urban Policy Framework (NUPF)’ outlines an integrated and coherent approach towards the urbanisation in India and we are seeking citizens’ comments on this through the SmartNet and MyGov portals to put in place a comprehensive urban policy which would result in complete urban transformation in the country in coming years, says Durga Shanker Mishra, Secretary, Ministry of Housing & Urban Affairs, Government of India, in an exclusive interview with Souvik Goswami of Elets News Network (ENN).

What is your assessment of the progress of ‘Smart Cities Mis 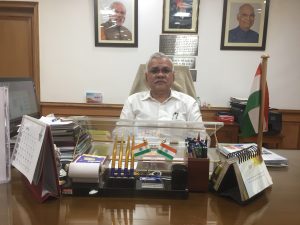 In the ‘Smart Cities Mission’ our first commitment was to select 100 cities through two level challenge process- State and Central; get SPVs formed, and project management consultants (PMCs) instituted to projectise the plans and ensure that works begin at the earliest. I am happy to share that all 100 smart cities have been selected, PMCs instituted and city-level advisory forums (CLAFs) formed.

In all the 100 smart cities, Special Purpose Vehicle (SPVs) have begun functioning. Detailed Project Reports (DPRs) have been prepared and converted into tenders and many have been awarded to commence the works on ground. Out of the total Rs 2,05,000 crore worth of Smart City Plans for these 100 smart cities, we have tendered out works for nearly Rs 133,000 crore worth; and projects for over Rs 87,000 crore have been grounded for construction. So far various works of more than Rs 14,000 crores have been completed. This is a huge success, as it takes lot of time to go through the transparent process of commencing the work.

As many as 16 smart command and control centres (SCCCs) have already been made operational and by the end of 2019, more than 50 SCCCs will be operational in the country. This facility was extensively used in recently held largest human congregation in Kumbh at Prayagraj for crowd control. Their effective use have reduced crime incidences, improved traffic compliances, bettered utilisation of pubic utilities like sanitation, water, transport etc, enhanced safety & security, and many other benefits. They work like brain and nervous system of the city and could be scaled up modularly to enhance reach and utilisation.

Further, 23 smart roads have been completed and 58 are under implementation. Many projects related to smart water, smart energy, smart solid/ liquid waste management, smart solar, smart education etc. have been completed or under implementation. Various public places, waterfronts, heritage buildings etc have been improved or works are under progress on them. At the same time, PPP projects worth Rs 2,280 crores have been completed and many are under progress. Private sector has shown encouraging interest in partnering for public delivery. Various impactful projects such as incubation/ innovation centres, skill training and livelihood promotion facilities etc have been completed/ under progress. Smart governance, pubic facilitation and grievance redressal are direct benefits flowing to the citizens. Very good results of Smart Cities Mission are visible across the country. The respective citizens and visitors can directly feel those changes.

Smart cities programme of such a scale has never been undertaken in any part of the world till date.

It is important to make cities of future with high livability index. What is your opinion on this?

The ‘Smart Cities Mission’ is like lighthouse project for us. Urbanisation is taking place rapidly in our country. In the next three decade, more than 50 percent of population will be living in urban areas.  Are we prepared for tomorrow? Are we prepared to provide urban amenities to such a huge chunk of urban population in future? That is why we are keeping the benchmarks very high. Smart Cities Mission is a step in the right direction. Proper planning along with technology will help us to use available resources in an efficient manner and the mission is showcasing that. We are trying to ensure that future cities would be sustainable and livable.

How technological innovation is playing an important part in India’s urban overhaul?

Technology is extremely vital and data is the game changer. Analysis of data is helping us in decision making. Earlier, every city was doing something or the other in its own way, but now we are trying to synchronise everything with the help of technology and innovation. This will help in the reduction of cost, promote local entrepreneurship, etc. There are 40 researcher fellows with the ministry who are all engaged in analysing the data to find solutions to various urban challenges. Apart from ‘Smart Cities Mission,’ there are other ambitious government flagship programmes like ‘Swachh Bharat Mission,’ etc. Do you think that these kinds of convergence of various programmes to bring transformation in urban landscape have worked well?

There is no doubt about it. The ‘Swachh Bharat Mission’ has been one of the most important contributors to make cities smart. Unless the cities are neat and clean, how can be they smart and beautiful? Add to this, ‘Housing for All’, ‘AMRUT’, ‘National Urban Livelihood Mission’, etc; all of which have been converged to ensure the success of Smart Cities Mission.

‘Swachh Bharat Mission’ has played the most important role in the scheme of things. ‘Smart Cities Mission’ is for 100 cities, but ‘Swachh Bharat Mission’ is meant for all cities across the country and it has done wonders. Initially, people had doubts when this programme was launched in October 2014, but now even the most skeptics are beginning to see the success of the mission.

This success has come from three components: 23 States/UTs fully and 4,144 cities become open defecation free (ODF) with over 62 lakh individual and five lakh community/ public toilets having been constructed; effective solid waste management (door-to-door collection of garbage has reached nearly 90%, segregation at source into dry and wet waste has reached around 60% and over 53% of waste is being treated scientifically- this was around 15% only five years ago); and massive behavioural change (through citizens participation as swachhagrahis, messages from community leaders of eminence for awareness creation). It has truly become Jan Andolan (mass movement) now.

What progress has been made in the Urban Housing sector?

Hon’ble Prime Minister envisioned that everybody in the country should have a house by 2022, when we celebrate 75th Anniversary of India’s Independence. This led to PMAY-Urban Mission for urban areas. I am happy to share that we have completed and delivered more than 25 lakh houses to the beneficiaries out of the total assessed demand of 1.0 crore conveyed by States/UTs. We have already sanctioned around 81 lakhs dwelling units under 4 different verticals: Beneficiaries Led Construction (BLC), Affordable Housing Unser Partnership (AHP), In Situ Slum Redevelopment (ISSR) and Credit Linked Subsidy Scheme (CLSS). For the first time middle class beneficiaries with annual income up to Rs 18 lakh are being benefitted under CLSS through interest subventions, which amount to around Rs 6 lakhs over a period of 20 years of loan repayment term. We have benefitted over 1.5 lakh such MIG beneficiaries and more than 5 lakh CLSS beneficiaries that includes EWS and LIGs as well. Hon’ble Prime Minister recently launched Global Housing Technology Challenge to get the best technology in Housing for quick, resource efficient, cost effective green technologies in the country. Ministry is also working to promote rental housing in the urban areas.

Another important issue is employment and through National Urban Livelihood Mission, we are addressing the problem of unemployment. We have trained over nine lakh people and more than five lakh have been funded by us for employment. Nearly 36 lakh women have been engaged in Self Help Groups (SHGs) to improve livelihood opportunities. Street vendors are being mainstreamed at a massive scale through the States/ UTs and city administration.

Urban Transport is another challenge being addressed in a big way. Over 657 km of Metro Rails have been made operational in 18 cities; work is under progress on over 800 km in these 18 and another 9 cities. For the first time, Regional Rapid Transport System (RRTS) has been started between Meerut to Delhi. Once made operational in next 5 years, one can cover distance of 82 km with 16 intermediate stoppages in just 49 minutes. This will obviate the need to live in Delhi. One can live in nearby city and commute efficiently to do the work in the national capital city. RRTS from Delhi to Alwar and Delhi to Panipat are in advance planning stages of preparations. Recently Hon’ble Prime Minister launched ‘One Nation One Card’ System with indigenously developed Debit/Credit Cards with National Common Mobility Card Standards, Automatic Fare Collection Gate and whole System. India becomes one among very few countries, which have such capability. Many other works are going on to improve ease in urban mobility.

Shed some light on the challenges in the course of urban transformation.

There are many challenges and that’s why we are trying to address them through AMRUT and Swachh Bharat Mission. Rejuvenation of water bodies is an area of concern. But some cities have done wonderful work on this front and we are trying to replicate those in other cities.

We are now working on a new Urban Policy. The Draft National Urban Policy Framework (NUPF) outlines an integrated and coherent approach towards the future of urban planning and development in India. We are seeking citizens’ comments and suggestions on this through SmartNet and MyGov portals to put in place a comprehensive urban policy. This will be done for the first time. Considering the rapid pace of organisation in the country and our experience in steering various urban missions in last five years, I think it is ripe to prepare this policy which would result into complete urban transformation in coming years.