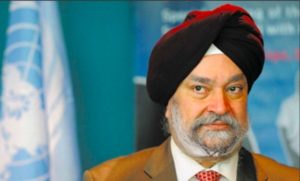 Minister of State for Housing and Urban Affairs Hardeep Singh Puri has called for the integration of disabled-friendly measures at the initial stage of planning the projects for the Smart City Mission, an ambitious urban development project launched by the central government to build citizen-friendly sustainable Indian cities.

Speaking at a workshop organised by the National Institute of Urban Affairs in Delhi, Puri said, “In conjunction with the Atal Mission for Rejuvenation and Urban Transformation (AMRUT), the Smart Cities Mission seeks to ensure that the most vulnerable sections of our society enjoy ‘ease of living’ in Indian cities.”

The minister said the feedback emanating from stakeholders’ interactions will be sent to the CEOs and project managers of the Smart Cities to be incorporated in their plans.

Saying that India lacks data on disability, Puri said that “We will be looking at 25 percent of the population that will need universal accessibility in order to live independently and with dignity.”

Citing the Disability Act of 1995, the minister said the law mandates making all buildings, services and products accessible for persons with disability by giving definite timelines for implementation and retrofitting.