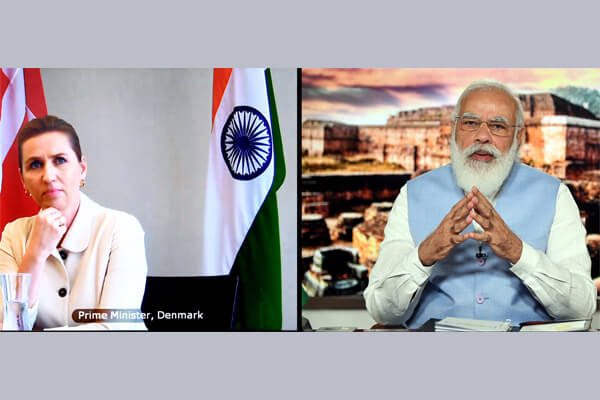 In an almost hour-long virtual summit co-chaired by Her Excellency Mette Frederiksen, Prime Minister of the Kingdom of Denmark and His Excellency Narendra Modi, Prime Minister of India, in-depth discussions were held on their bilateral relations, COVID-19 pandemic, and global matters in the interest of both the countries on September 28, 2020.

The mainstream discussions included climate change and green transition. Both the sides reached a common understanding with a view to accelerating sustainable economies and societies.

They further noted with satisfaction the continued development of bilateral relations based on historical links, common democratic traditions and shared a desire for regional, as well as international peace and stability.

The two PMs agreed to elevate India-Denmark relations to a Green Strategic Partnership. This partnership would build on and consolidate the existing agreement establishing a Joint Commission for Cooperation (signed February 6, 2009) between India and Denmark which envisaged cooperation within the political field; economic and commercial field; science and technology; environment; energy; education and culture.

The Green Strategic Partnership is a mutually beneficial arrangement to advance political cooperation, expand economic relations and green growth, create jobs and strengthen cooperation on addressing global challenges and opportunities; with focus on an ambitious implementation of the Paris Agreement and the UN Sustainable Development Goals.

The two Prime Ministers acknowledged the importance of establishing the Green Strategic Partnership, under which India and Denmark will cooperate through relevant ministries, institutions and stakeholders.

The two PMs confirmed their close partnership in addressing global challenges and solutions on green energy transition and climate change. The two sides envisage the energy partnership to be further strengthened over the coming years.

Further, India and Denmark agree to be at the forefront of the global fight against climate change. Both the countries have set very ambitious national targets on climate and energy that will contribute to an ambitious implementation of the Paris Agreement. Together, the two countries will show the world that delivering on ambitious climate and sustainable energy goals are possible.

Moreover, the two PMs agreed to work towards further expanding and strengthening the existing Government-to-Government cooperation on environment/water and circular economy. They also agreed to cooperate in water efficiency and non-revenue water (water loss) and in this context tasked the Indian Ministry of Jal Shakti and the Danish Environmental Protection Agency and the Danish Ministry of Environment and Food to develop a Work Plan for an initial period of three years (2021-23).

Addressing sustainable development, both the sides noted the holding of 2nd India-Denmark JWG on Sustainable Urban Development virtually on June 26, 2020, and agreed to strengthen bilateral cooperation in sustainable urban development, including in smart cities through the Urban Living Lab in Goa. Both sides also agreed to strengthen existing City-to-City cooperation between Udaipur and Aarhus and Tumakuru and Aalborg.

Both the PMs welcomed the idea of developing partnerships between Governments, institutions and businesses of the two countries with special focus on green and climate-friendly technologies. They recognized the importance of regulatory framework conditions to support public and private investments in green energy.

India and Denmark recognize the importance of promoting and facilitating investments in science, technology and innovation (STI) via strong public-private partnerships as an important way to accelerate technology development and the implementation of new solutions.

Collaboration in STI supports the Green Strategic Partnership by promoting and strengthening relations between authorities, small and large companies and research and higher education institutions in India and Denmark. The two sides agree to build on existing strong bilateral STI partnerships with joint calls for projects in areas such as energy, water, bio-resources and ICT.

India and Denmark emphasized the potential and their common desire to strengthen dialogue and cooperation in the health sector. They confirmed their interest in expanding dialogue and sharing best practices on health policy issues, including on epidemics and vaccines, especially to combat Covid-19 and future pandemics. They agreed to work on expanding commercial opportunities for businesses by creating more favourable environments for the life science sector, including research collaborations.

The two leaders expressed their conviction that a decision of the two countries to establish Green Strategic Partnership between the Kingdom of Denmark and the Republic of India has opened a new chapter in the friendly and cooperative relations between them. Ambitious goals and actions will be identified within the areas and outlined in an Action Plan that will be worked out and endorsed as soon as possible.