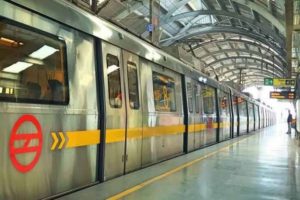 Delhi Chief Minister Arvind Kejriwal also expressed his happiness over renaming of Mukarba Chowk and its flyover after Capt Vikram Batra through a tweet. “The country came into being due to sacrifices of people like him,” he said in his tweet.

Captain Vikram Batra lost his life while fighting Pakistani troops during Kargil war in 1999 and was bestowed with the highest military honour of Param Vir Chakra for his valor.

“The Mukarba Chowk and its flyover have been renamed as Shahid Captain Vikram Batra. Parents of the martyr had requested for this so that people are inspired,” Sisodia said in a press briefing.

Sisodia also shared that the Lajpat Nagar flyover has also been renamed as Jhulelal Setu.

He also shared that there were requests to change the name of Pragati Maidan metro station to Supreme Court metro station.

“The naming committee has decided to change the name of Pragati Maidan metro station. The Delhi Metro will have to make the necessary changes which would take around a month.” he said.

“It is not that the road and flyover have been named after any politician. It is not a small thing if anyone passes through Captain Batra flyover and get inspired by his martyrdom, “ he added.

Sisodia mentioned that the change in names was based on demand from the locals.

Noida: NMRC to come up with new corridors in 2020