It’s very significant. It’s not just a logo and it’s identity. This identity should reflect the true essence of what Bengaluru is today. The logo aims in establishing Brand Bengaluru on the global tourist map and to highlight the rich heritage and culture of the city. Bengaluru is a 480-year-old city and a global one. We need to ensure that we weave a story around the city. This is more to do with an economic activity rather than just a launch of logo. The logo has some sense of pride; so once it is accepted more by the people, different stakeholders will use differently. This identity will help tourism.

Do you think this will impact the economy activity as well?

Yes, of course. Bengaluru is already most happenning city. The city has 23.5 million people coming in from the airport, if we are able to utilize even 10 percent of that and make them spend 100  more dollars in Bengaluru, then that will be an economic impact of this branding. So it surely has more to do with economic activity of the city.

What is your idea on Brand Bengaluru?

For people of Karnataka, it is a sense of pride and we need to take immense pride in the history we have and safeguard it. For outsiders and tourists, it’s an invitation. Karnataka and Bangalore have a lot of things to offer and this is where they should come.

With universal appeal, the logo, ‘Be U’, is a mix of typography in English and Kannada. The first part of the logo is in English and the rest in Kannada. The uniqueness of the logo is that every one can associate with it, pronounce it easily, and also various gift-articles can be crated out of it. The crowd-source-designed logo comes with an option of colours (green, red and yellow) depending on the occasion. The logo now aims to make every person coming to the city to spend on memorabilia. Current best-sellers of Karnataka, such as Mysore silks or Chanapatanna toys, have no direct Bengaluru-recall to them. The new logo, it is felt, will thus generate jobs in creating T-shirts, mugs, fridge magnets and other city-specific memorabilia.

I feel it is perfect identify for Bengaluru. Like in ‘I love New York’, New York is written in a particular way. Also, London, Amsterdam, Lyon, Melbourne. How do I identify Bengaluru outside the city? Now, we have the perfect identity that captures the spirit of the city and its people. The design comes from the very people of the city. The logo will help leverage Bengaluru’s identity better and create a brand value that could, in turn, stimulate the hospitality industry and create jobs by attracting more footfall. 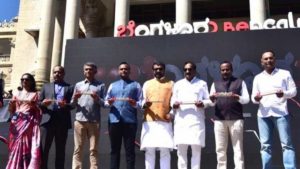 Can explain the genesis of the logo?

The idea of logo for Bengaluru started when the realisation came that though the State gets a steady flow of international and domestic tourists, there was nothing to tell them about the experiences Bengaluru offered. A report of the Legislative Tourism Subcommittee, comprising elected members from both Houses of the State Legislature, also said that though the city receives a good number of foreign tourists, there was no avenue to make them spend even $100 per person while smaller cities across the globe have successfully branded themselves as destination cities. From this emerged the idea of exclusive marketing of Bengaluru and then a logo. The idea of the logo is to integrate all experiences of Bengaluru online along with seamless offline solutions to ensure we are India’s first tourist-centric city and gateway to South India.