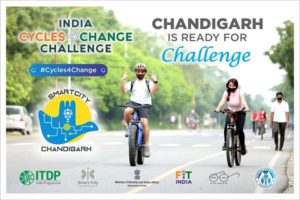 The Commissioner, while at the briefing at the event informed that the rally aims to make the participants and people aware of the benefits of cycling and the Centre’s ‘Cycle4Change’ challenge. Under the challenge, 10 bicycle docking stations will be placed at various locations in the city with 100 bicycles. The project will be launched as a pilot. Moreover, the Chandigarh Smart City looks forward to upscale and promote such events.

In order to make the challenge a successful move, handlebar surveys are also being conducted to know the challenges in cycling from a people’s perspective. As of now, five routes have been identified in the city for the cycling purpose and people are being encouraged to cycle, identify the issues and communicate them through the survey forms.