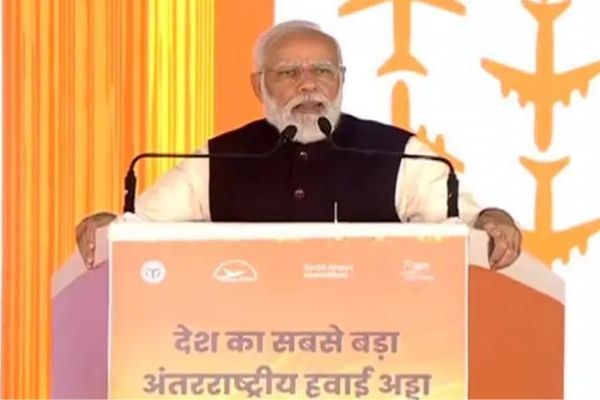 The countdown for Uttar Pradesh to get Asia’s largest airport begins as Prime Minister Narendra Modi laid the foundation of the Noida International Airport at Jewar today. The Chief Minister Yogi Adityanath-led government is eyeing the airport to be the logistics gateway for North India. As per the CM, the International airport will be completed by 2024 ahead of the next General Elections.

Prime Minister Narendra Modi on Thursday said that the Noida International Airport, Asia’s largest, world’s fourth-largest as well as India’s first net zero-emission airport, will open up new avenues of development and take the progress of Uttar Pradesh, especially Western UP, to new heights. it will not only boost tourism, including religious tourism, and create jobs for millions of youths of the state, but also connect small farmers and manufacturers of Western UP with international markets, the PM added.

“The Noida International Airport puts Jewar on the international map today. The airport will be the logistics gateway of north India and also boast of an integrated multi-modal cargo hub. It will fast track development of the state”, the PM said.

He added that the airport will also have full-fledged maintenance, repair and overhauling facility spread over 40 acres, which will save Rs 15,000 crore spent annually on maintenance and repair of aircraft in the country, pointing out that 85 per cent of maintenance and repair works of aircraft are currently done overseas. The PM said that the amount was big given the fact that the total cost of the airport was about Rs 30,000 crore.

Spread over an area of over 1300 hectares of land, the Jewar airport with its first phase complete will have a capacity to serve around 1.2 crore passengers a year. As per the government, the International airport will pose a game-changer for the state owing to its sheer scale and capacity. The airport is being developed under the PPP model in partnership with the state government and the Centre by Yamuna International Airport Private Limited (YIAPL), a 100 per cent subsidiary of the project’s Swiss concessionaire Zurich International Airport AG.

CM Yogi Adityanath is of the view that the project will benefit the entire state of Uttar Pradesh, particularly adjoining areas including Gautam Budh Nagar, Bulandshahr, Aligarh, and Hapur. Also, the airport will open up a huge number of employment opportunities for the people and will thereby impact the business dynamics of the state. The CM mentioned that he expects investments of over Rs 10,000 crore after the first phase and up to Rs 35,000 crore once the airport is fully built. While the Union Minister for Civil Aviation Jyotiraditya Scindia claimed the Noida airport will be Asia’s largest and will result in employment opportunities for over a lakh people.

Once up and running, the international airport will cater to an estimated footfall of over one crore annually providing the much-required boost to tourism in Agra and Mathura. It will make travelling an easy affair for the residents of East Delhi, Noida, Ghaziabad, Greater Noida, Meerut and nearby districts.

Ahead of the stone laying ceremony, the Prime Minister on November 24 took to Twitter and wrote, “Tomorrow, 25th November is a major day for India’s and Uttar Pradesh’s strides in infra creation. At 1 PM, the foundation stone of the Noida International Airport will be laid. This project will significantly boost commerce, connectivity and tourism.”

Amit Modi, Director, ABA Corp and President elect CREDAI Western UP said, “The inauguration of Jewar Airport is going to be a gamechanger for the region of Noida. It will be establishing the city on a global logistics map. The state government has always been very supportive and proactive in terms of development opportunities, ease of doing business, etc. Now with this airport, the region will reap economic multiplier benefits, it will also open sources of employment in the construction business. It will also be giving a boost to the corporate travel and leisure opportunities.”

Manoj Gaur, CMD Gaurs Group and Vice President North CREDAI said, “Today is one of the biggest days for the Yamuna Expressway and NCR region. We are delighted that Hon’ble PM Modi and Hon’ble CM Yogi Adityanath have laid the foundation stone of Noida International Airport at Jewar. It is phenomenal news for the upliftment of the region. The region has already seen immense investment which would result in economic growth, not only of the YEIDA region but also of the entire state. The increasing business activity will also ensure employment opportunities that should result in increased demand for residential as well as commercial properties.”

Tomorrow, 25th November is a major day for India’s and Uttar Pradesh’s strides in infra creation. At 1 PM, the foundation stone of the Noida International Airport will be laid. This project will significantly boost commerce, connectivity and tourism. https://t.co/8sSa8R1aFl