Karnal is a historical city located in Haryana and known as the birthplace of Karnal, one of the protagonists from the mythological epic Mahabharata. In the past couple of years, Karnal has witnessed increased cases violence against women, mob congregation and traffic violations. In June 2017, when Karnal was included in the smart city project, the need for surveillance solutions was realised by the Government. The authorities were on a lookout for solutions that not only deterred crime and violations, but also provide flexible integration into existing or future technologies. A plan was finalised for implementation of smart surveillance solutions for supporting the city police in identifying criminals and traffic rule violators. 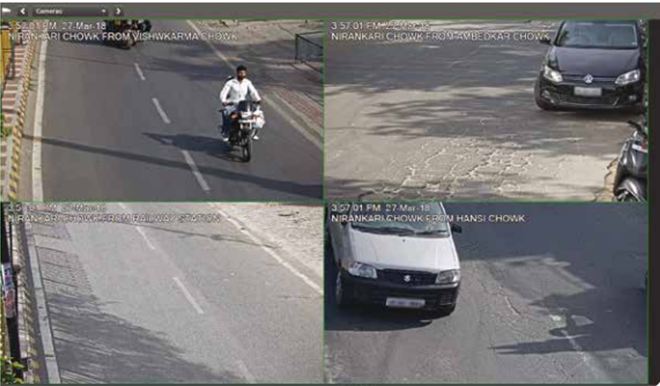 The solution involved implementation of 104 Axis fixed box cameras (AXIS P1365) and 25 Axis PTZ cameras (AXIS P5635-E) which were installed across major junctions, streets and tourist spots in Karnal. They were primarily chosen because of their ability to capture rapid movement in HDTV resolution and deliver excellent image quality even in low-light conditions. The cameras come with Axis proprietary Zipstream technology which enables compressed format streaming in real time, allowing transfer of data on low bandwidth. The technology also boosts the compatibility quotient making it ideal for integration with other products in the long-run.

As a result, the security upgradations across Karnal have been instrumental in helping the city police to shift from the traditional method of postmortem analysis to digital real-time monitoring thereby assisting the authorities to bring down crime and traffic violations.

According to Rajiv Batra, Founder & Owner, Door Sanchar Systems, “We are elated to be chosen for this mega Smart City project that has helped reduce crime rates and curb traffic violations. This implementation furthers Karnal’s Smart City mission by creating preparedness for future optimised integrations.”

Crime control: On analysing the live or stored footage the city police have been able to successfully resolve theft and robbery cases. The cameras have also helped identify mobs and break them up when the authorities found it suspicious.

Traffic control: Since the installation of the cameras, drivers and commuters have been mindful to avoid traffic violations as they are now aware that violations will be awarded with a ticket/challan. The cameras have made it easier for the police to identify culprits behind stolen vehicles – or at least trace the stolen vehicles.

Process: Outdoor city surveillance projects usually involve identification of critical areas and patient coordination with various government authorities to ensure seamless execution. To start this massive surveillance project, a 30 km of Optical Fiber Ring for hybrid network had to be installed along with radio links for transfer of data to the control room. The system integrators had to overcome obstacles such as water pipelines and underground cables and then execute the entire process of the project. The city already had a lot of facilities underground and there was no appropriate mapping, which could act as guidance for laying of fresh optic fibre cables. Maximum care was taken during this stage as any damage to the existing infrastructure could result in huge spends. The integrators also had to approach Karnal’s Electricity Department to get a direct connection which is crucial for operating the cameras.

Next phase with AI:  The analytics-ready Axis network cameras were chosen as they can be upgraded with future softwares because of the open platforms on which they operate. This allows extra functionalities to be added in future for enhanced security and intelligent measures such as an AI upgrade. The premium range of products is durable and can be integrated with AI technologies for automation of trigger alarms in case of any violation. In future, cameras can be integrated with voice detection capabilities for making announcements and discouraging illegal activities. The cameras along with real-time analytics will give authorities enough intelligence to make Karnal a smart and safe city to live in.