The operations of governments, firms, educational institutions worldwide have nearly come to a halt due to the outbreak of the Novel Coronavirus pandemic. The scare of the virus infection has not only affected the work but largely impacted the economy dipping it considerably, writes Adarsh Som of Elets News Network (ENN). 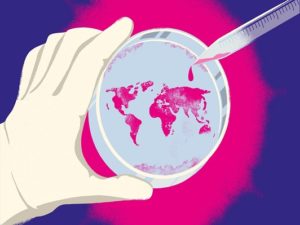 As per the figures, nearly 13,000 people worldwide have died of the viral infection as of yet. And, there are around 3,11,000 people infected in 177 countries and territories across the globe. Though the death toll and the data on infected people around the world are scary, one question that needs to be answered is: is there everything negative about the scenario the world is facing today? What about our smart tech which we brag about that has replaced the physical working of humans with computerised machines? Do our smart cities have an opportunity to make people aware of the smart tech which can get the work done without any human being physically interacting?

Smart education is the need of the hour

As per the Government’s advisory, all the educational institutions are locked down until things get under control. It seems that a situation like this calls for the country to implement online lectures from teachers which they can prepare at home and can be shared with students via school’s websites. Moreover, live classes can be taken by the teachers online as we do have the tech in place. Also, illustration videos can be used to make students understand the concepts.

Of course, all of this sounds good but ambitious too. To execute such measures, the authorities need to step up and install facilities to cater to such requirements. Not many government-run schools have their own websites or for that matter active wifi and other systems in place. On the other hand, not even all the students attending government schools do have such facilities available. In such a situation, the government must look at the possibilities of facilitating students with such gadgets and technologies which nowadays have become more or less a necessity. Moreover, the authorities can even tie-up with ed-tech brands operating privately to deliver quality services. Such a situation can hit the globe in future as well, when will our smart tech enter the game especially like the present scenario when we are in the most need of it.

One of the successful examples which the authorities need to look forward to – Apeejay School International, Panchsheel Park. The school has been conducting online classes for its students for a while now. Apeejay School, in a press release said that the aim of the institution is to keep their students constructively and meaningfully engaged. The facility powering the digital infrastructure of the school is the strength behind making this initiative successful. Amidst the coronavirus scare, education of school students across the country is compromised highly and therefore there is an urgent need to take up such initiatives to resume back the nurturing of young  minds.

Conferences banned, what about webinars?

Amidst the viral outbreak, no one is ready to take a chance on their health and in fact, the governments have been supportive of the fact and banned functions and programmes or any gatherings for that matter. Here is the catch, having our Information Technology and computers and advanced broadcasting systems in place we can conference can be held online in the form of webinars.

When we talk about making cities smart by implementing technological measures, installing right machinery and taking things on digital platforms why people do not empower themselves using the same tech and perform their important meetings, discussions or webinars in a more efficient and cost-effective manner.

Microsoft can be seen as a lighthouse example for using technology to empower its events. Recently, the tech giant announced that NASDAQ-MSFT Build Developer Conference, Microsoft’s biggest annual event, was conducted online on March 19th.

Working from home the new hype in the country or globally for that matter is only possible because of the tech that we use every day. Similarly, people are scared about shops being closed, markets being locked down, banks will halt their services. As a matter of fact, maybe yes, but online stores will not go off work, medicines can still be fetched on the internet, most of us do use internet/ mobile banking. We need to ponder on  is the situation that worse or are we making it so.

Finally, many around the world are becoming afraid of being quarantined or isolated. There is a need to look at it from a different angle altogether. Being quarantined can prevent one from meeting the other and carrying out important work in person but it certainly does not stop anyone from using smart technology to get the same work done easily, in less time, effectively, and without actually getting involved physically.