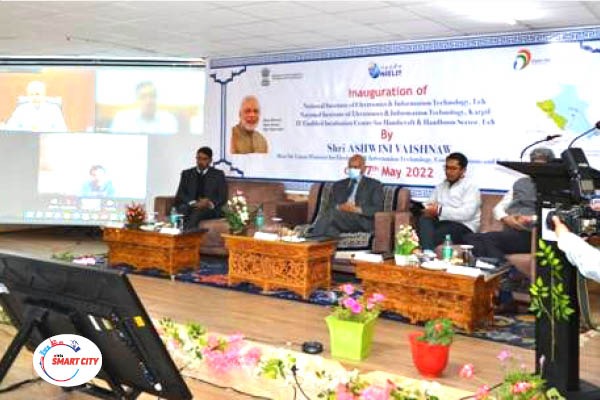 Union Cabinet Minister for IT and Electronics Ashwini Vaishnaw inaugurated the National Institute of Electronics and Information Technology (NIELIT) Centre at Leh, Extension Centre Kargil, and IT Enabled Incubation Centre for Handicraft and Handloom Sector, on 17 May 2022 through video conferencing.

Dr Tripathi, DG NIELIT welcomed the Chief Guest and other dignitaries and appreciated the support extended by the Ministry in opening the NIELIT Centres at Leh, Kargil and setting up of IT Enabled Incubation Centre at Leh.

The IT Minister while inaugurating the NIELIT Centres at Leh, Kargil and the Incubation Centre at Leh, reiterated the commitment of the Prime Minister for the development of the Union Territory (UT) of Ladakh. He informed that after the abrogation of Article 370 and the formation of new UT, the path of development in this area has opened manifolds. Any proposal related to IT Education, Training, Incubation for the development of Ladakh will be approved immediately by the Ministry. He also complimented NIELIT for starting the Leh and Kargil Centres and setting of IT Enabled Incubation Centre in record time which needs to be scaled up at faster pace.

The minister further elaborated that in line with vision of the PM to provide saturation coverage, the whole of UT of Ladakh would be covered by mobile connectivity. Even if there are ten villages on top of the hill the connectivity will be provided. The communication ministry is working on different available technological solutions as an alternative to optical fibre and once it is finalised and regulatory requirements are freezed, the coverage would be provided in every corner of not only Ladakh but Kargil, Jammu & Kashmir in the first phase.

He further informed that in line with the vision of Aatamanirbhar Bharat of the Prime Minister, an indigenous 5G stack is ready which will be used for upgradation of BSNL towers and the first phase will be rolled out in the month of September 2022 and in the year 2023, all the hilly states including the UT of Ladakh, Jammu & Kashmir, Himachal Pradesh, Uttarakhand, Arunachal Pradesh, etc. would have upgraded BSNL towers.

The minister emphasised that rail connectivity to Leh is of utmost importance for long term sustainable development of the UT. Many options are being evaluated and the Government of India is hopeful that with the continuous effort all stakeholders, it would become a reality very soon. The minister informed that hydrogen train proposed by LG, Ladakh and other representatives of the UT has become a reality and its manufacturing has already started. Even though this train comes to Leh later but this would always be gift of Ladakh to the nation.

Ladakh LG R K Mathur appreciated that NIELIT Leh has been made an independent centre which would play a very important role to augment IT enablement in the youngest UT of the country. He emphasised that NIELIT Leh, apart from offering its normal courses, has contributed towards to Digital Literacy of the UT. He opined that the local artisans working in the Wood and Handloom industry after getting hands on training at IT Enabled Incubation Centre would benefit hugely by learning the digital marketing, entrepreneurship, and packaging skills. Through this initiative their art would not be restricted to local market but could make inroads in the Global market.

Saugat Biswas, Commissioner Secretary, IT, Ladakh informed that the CNC router which is one of its kind and the waste to wealth 3D printer placed at Incubation Centre set up by NIELIT and IT Department of Ladakh funded by MeitY would help the artisans in improving the quality of their products.

Jamyang Tsering Namgyal lauded the support being provided by the Prime Minister in the fastest growing UT of Ladakh. He appreciated the efforts being made by NIELIT at Leh Centre wherein till date over 8000 participants have benefitted from various short/long term training programs in the field of IECT. The unique and one of its kind IT enabled Incubation Centre in the field of Handicraft and Handloom would go a long way in the upliftment of the local artisans. He appreciated wholeheartedly the hard work and dedication put-in by Phuntsog Toldan, Director-in-charge, NIELIT Leh.

MoHUA presents DMRC with ‘Award of Excellence in Urban Transport’