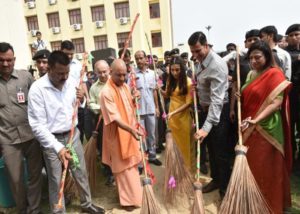 The Chief Minister announced this in his address at a programme ‘UP Main Swachhta ka Shankhnaad’ organised at The Millennium school. He said that by adopting cleanliness the dream of a healthy society and nation can be achieved. He added that hygiene and cleanliness cannot be personal but for the society and hence it was the duty of every citizen to encourage it.

He also said that the present state government in UP was committed to making the ‘Swachh Bharat Mission’ of the union government a success through a public movement. Saying that developed nations have always laid special focus on cleanliness, the Chief Minister said people’s participation will surely make it a huge success in UP as well.

Yogi also pointed out that the focus of the mission should be widened further and that it should touch the lives of every person in the society to enable people to work towards their optimum in this direction.

He further informed that the state government was working with all seriousness in making the dream of Prime Minister Narendra Modi to make the country ODF by October 02, 2018. 1627 villages on the banks of the holy river Ganga have been made ODF and added that the state government would make 30 districts of the state open defecation free by December 31, 2017. The entire state will be made ODF by October 02, 2018, he added and pointed out that social organizations, educational institutes and media can make such programs successful with their outreach to the masses.

Yogi also said that Akhsay Kumar and his co-star Bhoomi Pednekar, in their forthcoming film ‘Toilet: Ek prem Katha’, have used their acting to spread the message to the masses and inspired many. The Chief Minister said that the film will give a new direction to the sensitivity of the society and can go a long way in weeding out the banes of the society.

On this occasion, the Chief Minister also announced making Akshay Kumar the brand ambassador of the Swachh Bharat Mission in UP and making his forthcoming film ‘Toilet : Ek Prem Katha’ tax free in the state. Yogi also administered an oath of cleanliness to school students and exhorted people to do ‘shramdaan’ for atlas 100 hours in a year and two hours every week. He also urged students to administer this oath to 100 other people so that the cleanliness drive can pick pace.